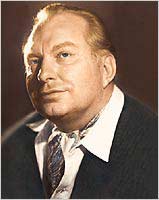 “The first principle of my own philosophy,” wrote , “is that wisdom is meant for anyone who wishes to reach for it. It is the servant of the commoner and king alike and should never be regarded with awe.” To this he added that philosophy must be capable of application, for “learning locked in mildewed books is of little use to anyone and therefore of no value unless it can be used.” Finally he declared philosophic knowledge to be only of value if true and workable, and thereby set the parameters for Dianetics and Scientology.

How came to discover these subjects is an immense story that effectively began in the first decades of the 20th century with his befriending of indigenous Blackfoot Indians in and around his Helena, Montana home. From here, the story unfolds with his study of Freudian theory with a Commander Joseph C. Thompson — the first United States naval officer to actually work with Freud in Vienna — and through journeys in Asia where Mr. Hubbard spent the better part of two years in travel and study.

Another crucial milestone in this venture was his study of engineering, mathematics and nuclear physics at George Washington University — all disciplines that would serve him well through later philosophic inquiry: point of fact, was the first to rigorously employ Western scientific methods to the study of spiritual matters.

His searches continued through the Second World War, where he tested his first Dianetics techniques, and created publishing history in 1950 with the release of the landmark Dianetics: The Modern Science of Mental Health, for the first time ever providing the oft-sought answers to questions that had eluded philosophers for centuries: What is the dynamic principle of existence? What causes man to behave as he does? And what is the resolution to the problems of the human mind? Without question, Dianetics answered these questions and more, prompting then-national columnist Walter Winchell to proclaim: “There is something new coming up in April called Dianetics. A new science which works with the invariability of physical science in the field of the human mind. From all indications, it will prove to be as revolutionary for humanity as the first caveman’s discovery and utilization of fire.”

From the release of Dianetics, further advancement was continuous, methodical and at least as revelatory as what had preceded it. At the heart of what Mr. Hubbard began to wrestle with through late 1950 and early 1951 was yet another key philosophical point. That is, if Dianetics constituted the definitive explanation of the human mind, then what was it that utilized the mind? Or more precisely, what was it that constituted life itself? In a decisive statement on the matter, he explained, “The further one investigated, the more one came to understand that here, in this creature Homo sapiens, were entirely too many unknowns.”