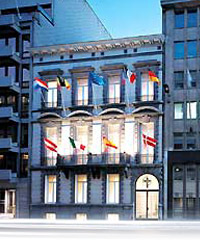 Fifty years have passed since the first Church of Scientology was founded, and over those years the churches of Scientology and their members have established themselves as important contributors in the cities of virtually every country in the world.

And while that expansion has continued on an international scale, what is most important is the positive impact that individual churches and members have had on their communities.

Scientologists have worked over the past five decades to defend and uphold human rights and religious freedoms — not only to preserve their own rights, but also to guarantee the rights and freedoms of every citizen. The freedoms of speech, choice, thought and belief are sacred, and their violation can be found at the root of any conflict.

Central to the establishment of international human rights is the Universal Declaration of Human Rights. Adopted by the United Nations in the aftermath of World War II, the declaration proclaims that all people are entitled to basic rights that none have the power to take away.

The Universal Declaration comprises the most fundamental rights and freedoms by which all people and their governments can align and act: freedom of speech, religion, education and the right to vote — 30 articles in all.

But as Mr. Hubbard pointed out, “Very few governments have implemented any part of the Universal Declaration of Human Rights. These governments have not grasped that their very survival depends utterly upon adopting such reforms and thus giving their peoples a cause, a civilization worth supporting, worth their patriotism.”

The need to make this document known has never been greater. A recent survey found that most people have never heard of it, while documents recently released have shown that the war on terror has resulted in international standards on human rights being waived in countries around the world.

To make this monumental document known far and wide, a campaign has been launched under the banner “Making Human Rights a Fact.” Key to this has been a new publication that covers the purpose and history of the Universal Declaration, every one of its human rights provisions, and messages from well-known human rights advocates. It tells people how they can help get their governments to adopt the Universal Declaration of Human Rights and follow its principles — and how they themselves can safeguard human rights in their own communities.

At the same time, a series of messages on the Universal Declaration are being placed in publications read by government officials, legislators, administrators and civic and social leaders. These urge readers to make human rights a fact, and direct them to the Church’s human rights publications and web sites to find out how.

At the same time, to truly make human rights a reality it is key to help children and young adults become aware of those rights. That is the focus of the Youth for Human Rights campaign, which uses massive distribution of human rights publications to reach these youths on a planetary scale.

Young people are not commonly taught human rights and many do not understand what they are. As a result, many enter adulthood with no idea of their basic rights. The booklet What Are Human Rights? was specifically written for children and contains a simplified version of the Universal Declaration of Human Rights.

This booklet, which has been translated into 19 different languages, was the centerpiece of a massive international tour that took the human rights message directly to leaders of government, educators and youth institutions and to children in 13 different countries.

The churches of Scientology are active in providing workable answers to the problems facing those active in the fields of human rights and social betterment.

The Problems of Work
details »